In previous lessons we have seen different types of neural networks, all of which solve regression or classification problems. We started with plain vanilla neural networks, which take a vector as input and pass it through some hidden layers to produce the output. We then added to this design to form new types of networks. For example, convolutional neural networks are well-suited for spatially organized data, making them a good choice for image classification. Recurrent neural networks are well-suited for sequential or temporal data, and thus excel at natural language processing. Here we introduce another type of network called a Generative Adversarial Network (GAN). These were first conceived in a paper published in 2014 by Ian Goodfellow et al. Unlike the others, this one does not solve regression or classification problems. It belongs to a special class of models called generative models, meaning its purpose is to create something, not classify something. GANs can learn to mimic almost any distribution of data we give it. There are many other types of generative models - variational autoencoders and boltzmann machines to name a few - however GANs come with their own set of advantages that lead many to regard them as the state of the art in generative modeling.

Specifically, GANs generate new data by taking a game theory approach. A GAN takes two neural networks and pits them together in a game, where each network tries to outperform the other. But much like in real life, when you play a game against a worthy adversary, you learn from them. Both networks learn from each other, and the end result is two high-performing neural networks, one of which is capable of generating brand new data.

One example of what a GAN might be able to do is generate images of dogs. We have already succeeded in classifying images as dogs (or cats) in our convolutional neural network workshop. However, image generation is a different task. More concretely, a traditional neural network takes a high-dimensional input and transforms it down to a low-dimensional output representing the prediction. We want to go in the opposite direction: take a low-dimensional input (such as 1 for dog or 0 for cat) and output a higher-dimensional image of a dog or cat. There are many correct answers to this task, and GANs consider all of them. Here is another way to think about it: classifiers try to predict p(y|x), while GANs predict p(x|y). In other words, GANs figure out how likely it is for a feature to show up in an image with label y.

The discriminator is fed both real images from the dataset, as well as fake ones made by the generator. Its goal is to determine which ones are fake and which ones are real, encoding its answer as a 1 or 0. The two networks are connected by piping the output of the generator to the input of the discriminator, and then training is conducted on the entire construction. The training process uses backpropagation and gradient descent just like before, with a few slight changes discussed below.

Mathematically, here is the game that is being played:

Note this is just the second term in the above expression, since the first term is out of the generator’s control (there is no \(\theta_{g}\)). This serves as the cost function for the generator, which we try to minimize using gradient descent. But in practice, it turns out this is not an effective way to train the generator. The reason is the gradient is very small in the early stages of training, so the parameters barely get adjusted and the generator learns very slowly. The gradient only gets respectably big towards the end of training. To alleviate this, we optimize this function instead:

That is, rather than try to minimize the chance the discriminator is right, we maximize the chance the discriminator is wrong. Also notice how we are finding the maximum, not the minimum, of this function. This means we need to perform the opposite of gradient descent, sometimes called “gradient ascent.” Gradient ascent simply finds the parameters that correspond to the maximum of a function, rather than the minimum.

Once the parameters have been adjusted via gradient ascent, the generator should be able to create realistic samples of data that strongly resemble the training data.

This is exactly the same as the expression representing the game, but without the \(\min_{\theta_{g}}\). Once training is completed, we actually throw out the discriminator. The generator is what we care about, the discriminator is simply a tool we use to train the generator.

The generator and discriminator start off very unintelligent, and must improve by playing the game against each other. Take a look at this high-level pseudocode that explicitly steps through how a GAN is trained. Carefully walk through each step and try to understand what is happening, the notation is the same as above. 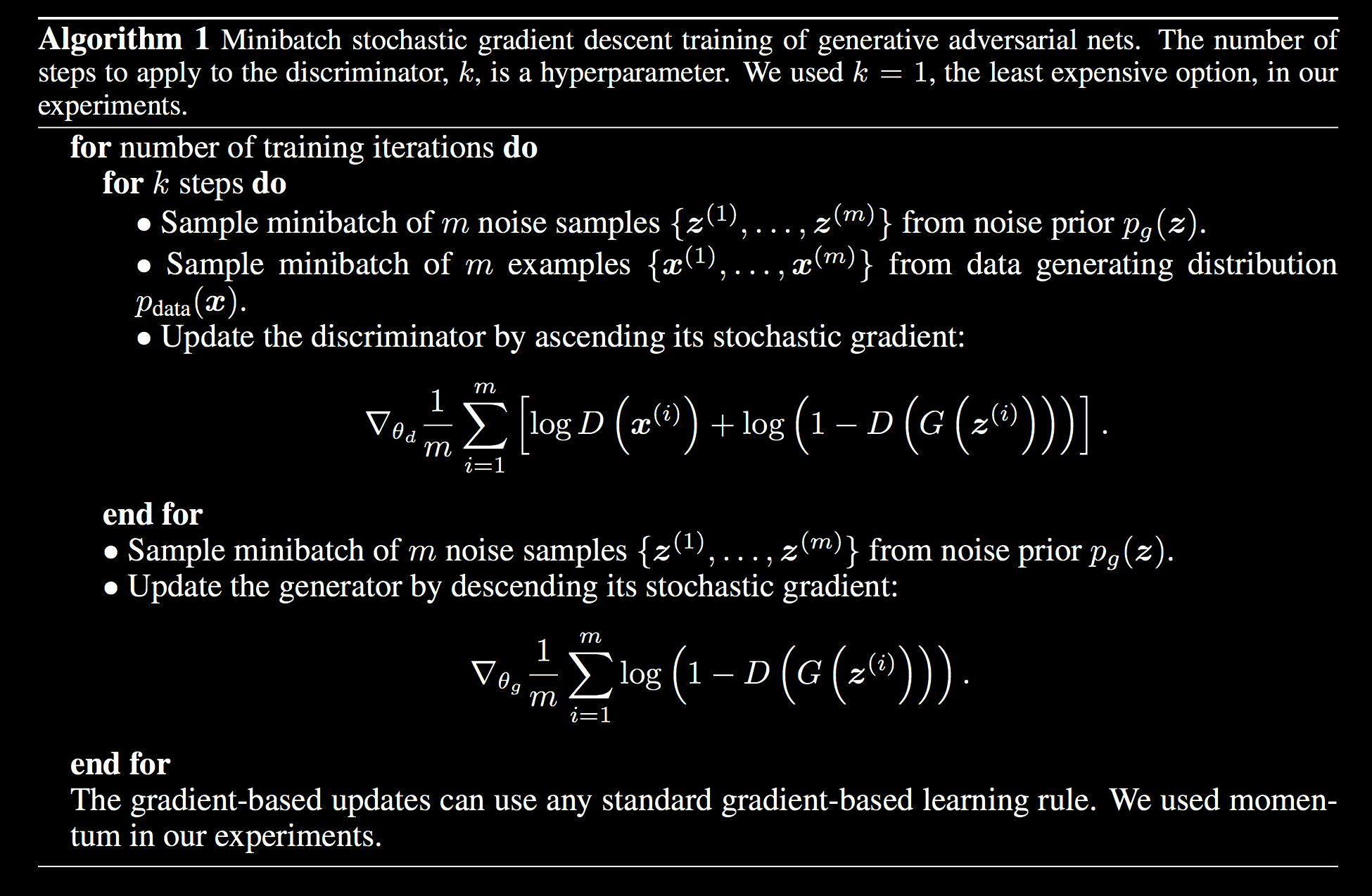 Additionally, while the generator is being trained, it is important to freeze the weights of the discriminator, and vice versa. Since both neural networks have different cost functions, we don’t want the training of one to interfere with the training of the other.

It is also important to adjust the learning rates of the generator and discriminator so they learn at about the same speed. If one learns much faster than the other, then we run into the vanishing gradient issue. Namely, the gradients will get very small for the network that is learning relatively slowly. Ongoing research has revealed other cost functions that can be used to avoid the vanishing gradient problem, however they are a more advanced topic.

Now let’s look at some pictures! In this section we see what GANs can do, and give some explanation as to what is going on in each research example.

Here is the first one: using GANs with some simple vector addition and subtraction, we can generate images based on combinations of other images. Take a look at this example, where a woman with sunglasses is generated without needing a training set containing of women with sunglasses. 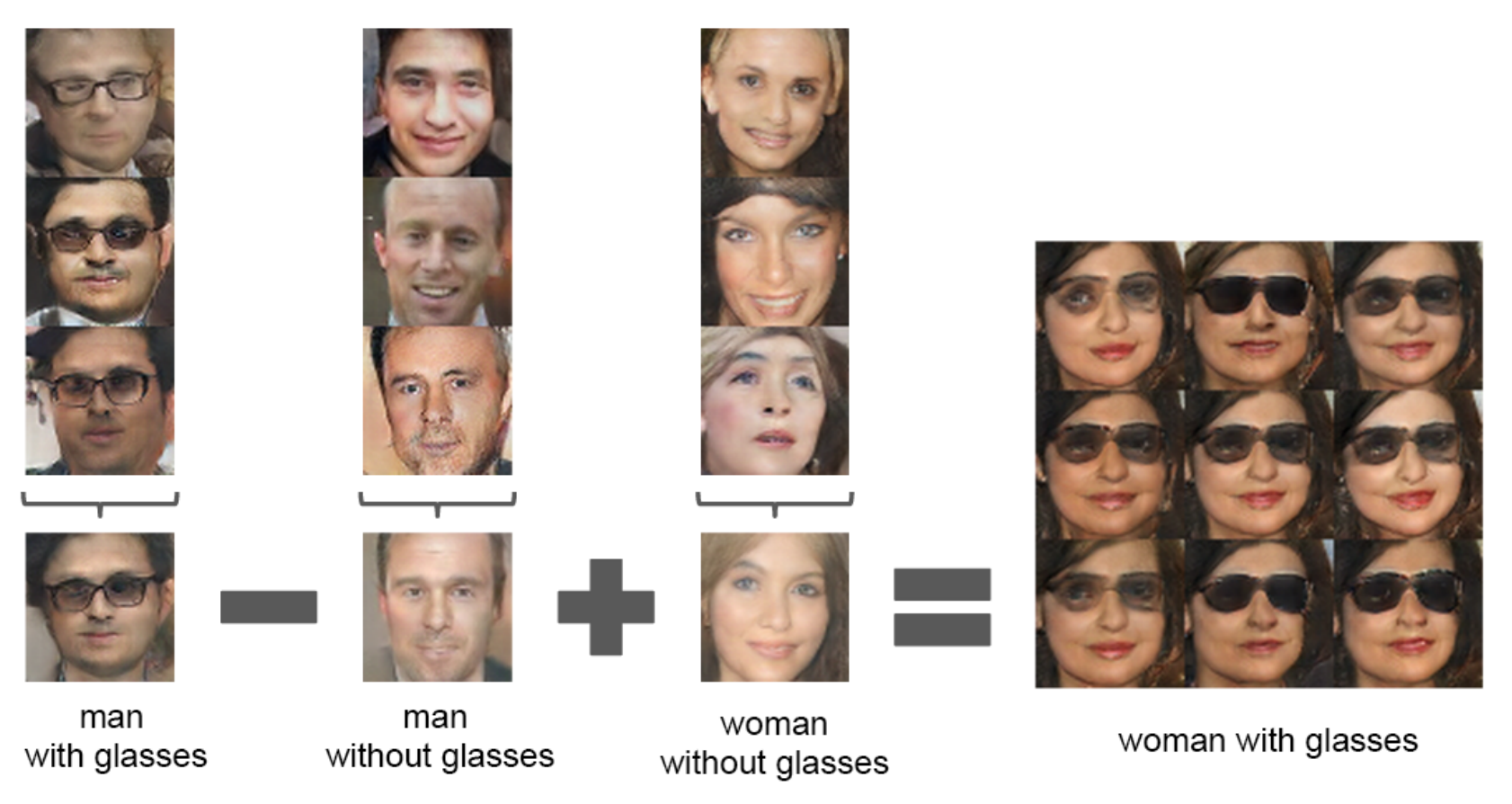 This example comes from a paper by Alec Radford and Luke Metz, and provides a great opportunity to talk more about latent space. First, imagine all image vectors represent a point in a high-dimensional space. This is often referred to as the latent space, and it turns out images that are generally similar have points in the latent space relatively close to each other. There are continuous paths through this space, which can be traversed by changing the values of the image vector components. This means it is possible to perform image addition and subtraction to construct new images. In other words, let’s say I’m given the latent vectors of the face of a man \(M\), the face of a man with sunglasses \(G\), and the face of a woman \(W\). Using vector addition and subtraction, the following expression would evaluate to an image vector of a woman wearing sunglasses: \(G-M+W\).

Let’s apply this to GANs by doing the same thing, using the example above. First use the generator to create a bunch of pictures of men with glasses, and average all of the input vectors \(z\) used to generate these images (note this random noise vector is still “high-dimensional,” although not as high as an image). Do the same for pictures of men without glasses, and women without glasses. Call these averaged vectors \(G'\), \(M'\) and \(W'\) respectively. Perform the same vector operation \(G'-M'+W'\) to get a new input vector that, when passed through the generator, will produce a woman wearing sunglasses. This works because all we are doing is moving through the latent space.

Another implication of this is we can generate images of dogs, for example, but also specify what its fur color, size, perspective angle, and any other feature should be. When generating an image of a dog there are many correct answers, but this manipulation of vectors throught the latent space allows us to be more specific.

Let’s take a look at the next study, which makes modifications to the GAN architecture to create what is referred to as a CycleGAN (see this paper). 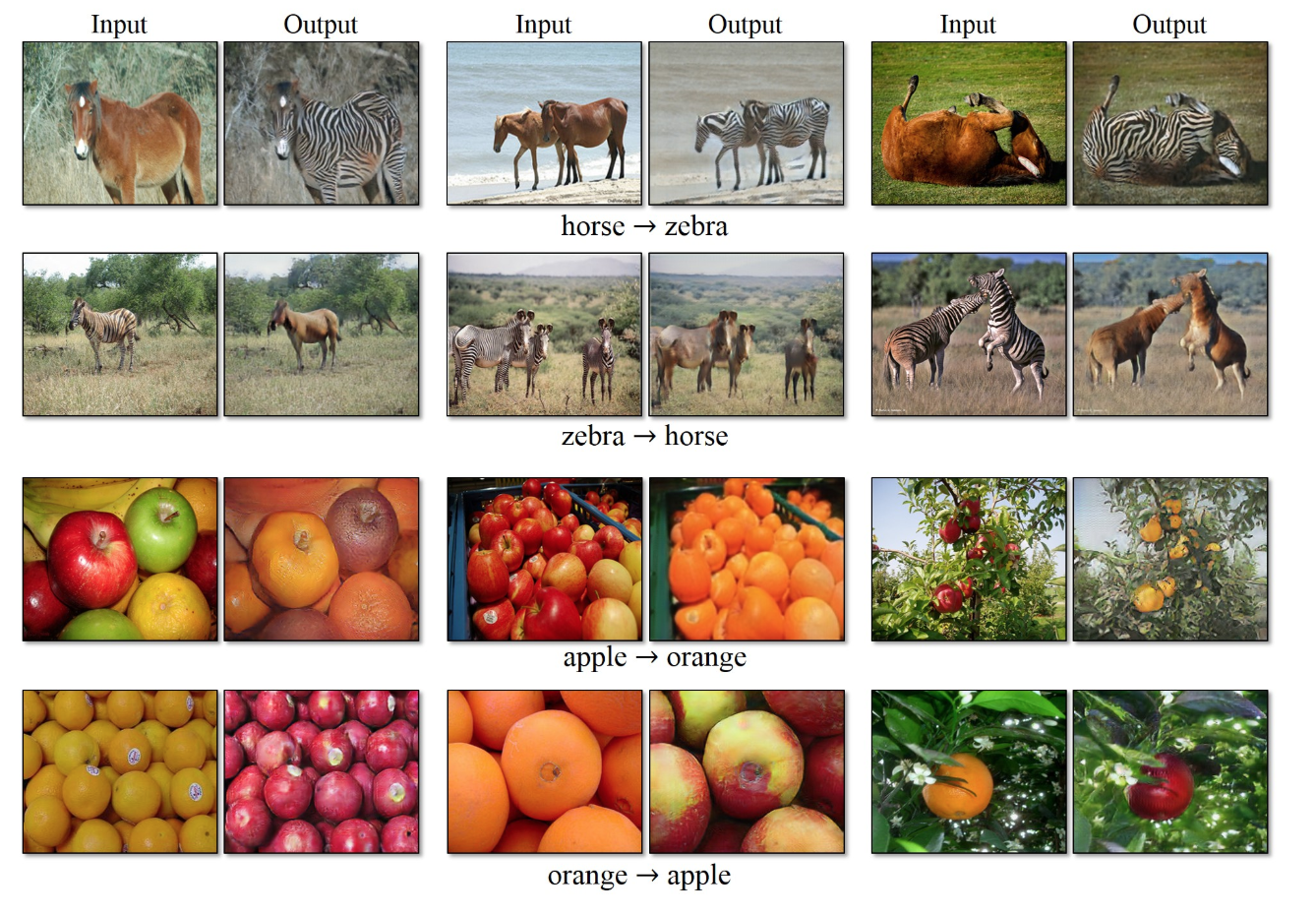 In this example, we can change the style of images through a process called domain transformation. Let’s use the first set of pictures of turning horses into zebras to explain. The horse belongs to a source domain we will call \(D_{a}\) and we wish to transfer it to the second domain \(D_{b}\) to make it look like a zebra. By putting two GANs together (for a total of 2 generators and 2 discriminators) we can move the images back and forth between these domains. Take a look at this architecture: 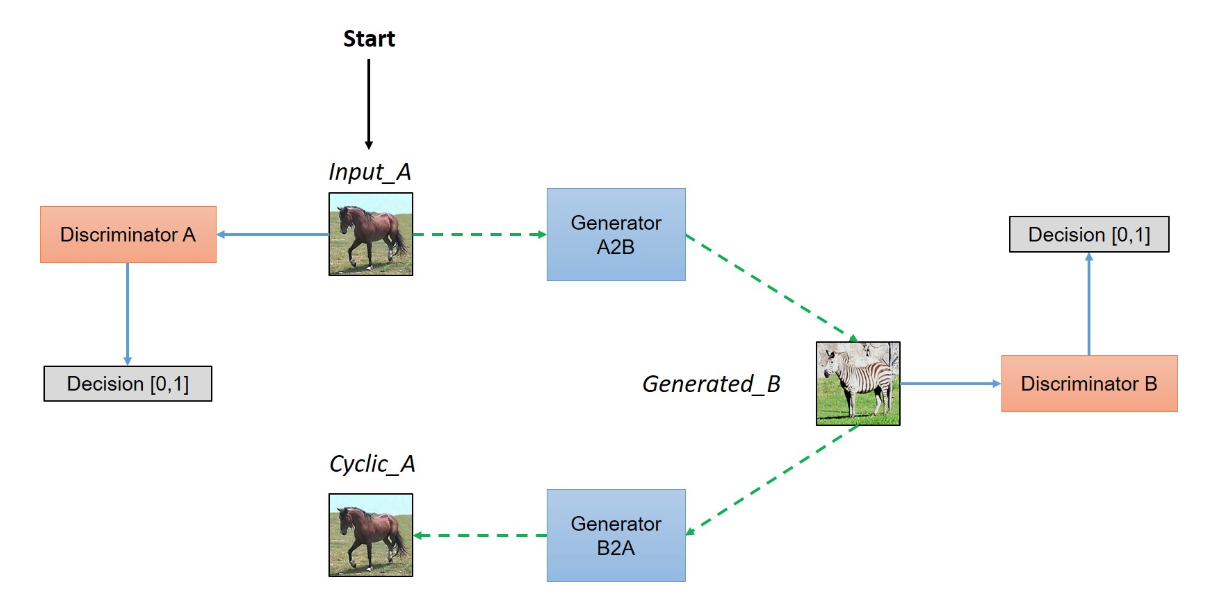 In this architecture, the adversary of Discriminator A is Generator B2A, while the adversary of Discriminator B is Generator A2B. If the image that is outputted by Generator B2A is extremely similar to the original image, then the CycleGAN has found a good mapping between the two domains. This means we don’t need to define the mapping ourselves - another key advantage to CycleGANs. A similar generative model called Pix2Pix requires explicitly providing this mapping to, for example, fill in sketches. As you can see here, each sketch must come from a “ground truth” that needs to be defined. 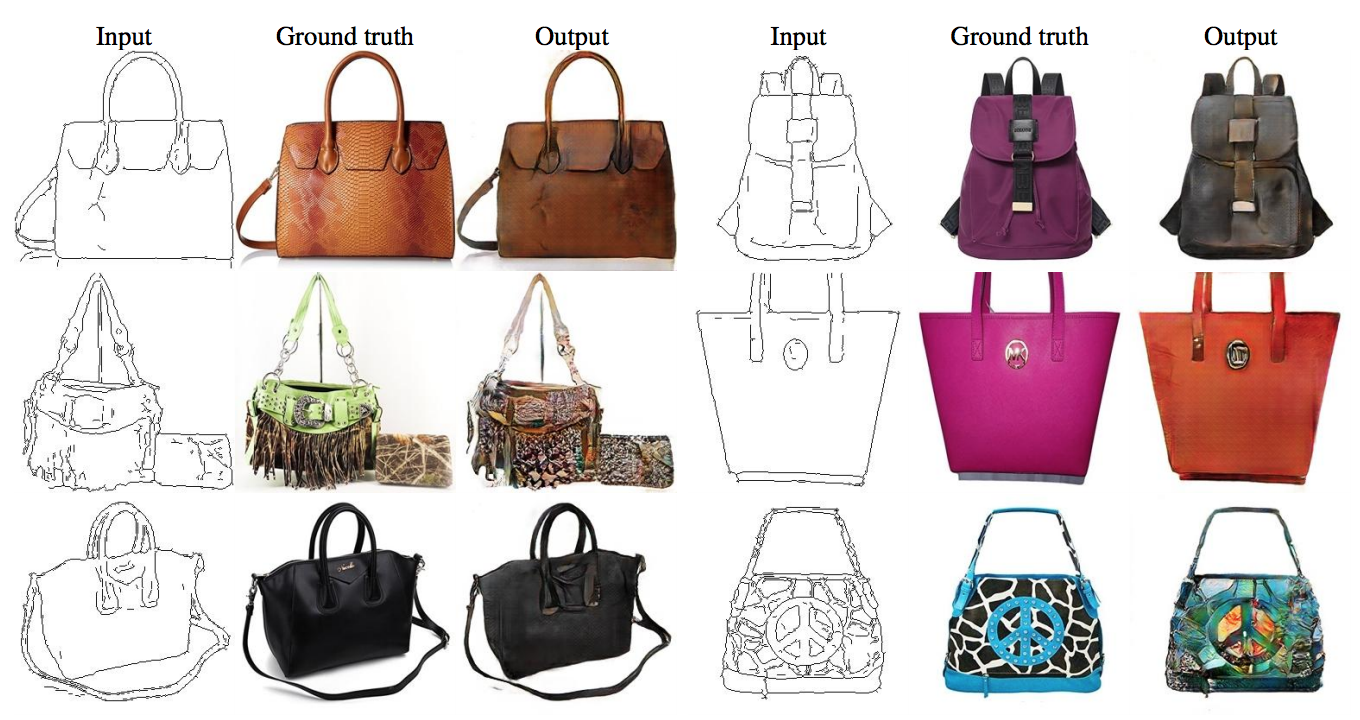 Here is yet another application of GANs, where text can be converted to images. Here is the paper on this. 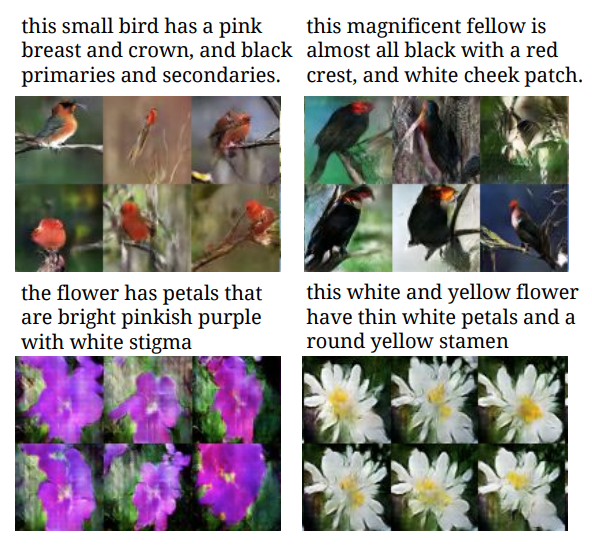 As you can see, there is much research on GANs and it is ongoing. They allow us to model nearly any distribution of data, even if we don’t directly have that data. People have sold artwork generated by GANs for hundreds of thousands of dollars - they really are exceptional at what they do.